ITP vs. OTP Cities and Communities of Atlanta

By Susan Finch and Amy Meadows

You probably already know that many Atlanta locals say “y’all,” but they also have a particular nickname for areas both inside and outside of the I-285 loop, a major interstate highway that encircles the city of Atlanta. Anything inside the loop is considered ITP, and anything beyond its borders is considered OTP. Whether you hope to relocate ITP or OTP, both sides of the perimeter feature gorgeous cities and historical towns from which to choose.

Living inside the perimeter offers quick access to the best of everything in Atlanta. Midtown, Downtown, Buckhead, the BeltLine and beyond—as well as a bustling atmosphere replete with culture, dining, shopping and more—are at your fingertips when you live ITP. Living intown and in the surrounding areas is actually becoming increasingly desirable and family-friendly; however, it is also ideally suited for young couples and professionals looking for condos and cozy single-family homes. Of course, when spacious quarters are a priority, living OTP is a must. OTP communities typically feature bigger homes, yards and a slower pace compared to metro Atlanta’s core. Many of OTP communities also overflow with green space—but they also offer a host of new downtown development, which allows them to provide residents with an excellent mix of small town charm and unexpected urban convenience.

So, are you ready to explore some of the most coveted cities and neighborhoods both ITP and OTP? Here’s where to get started.

Inside the Perimeter (ITP) 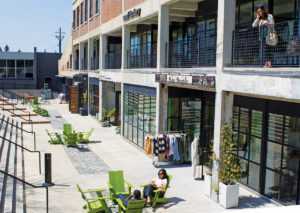 As the name implies, Westside is situated on the west of Atlanta less than a mile from Downtown’s Centennial Olympic Park. It initially became known for its historic Westside Village-turned-modern-mixed-use development in Vine City. Today, it is comprised of two distinct areas: West Midtown, which is home to the metro area’s renowned design district, including a bona fide artist enclave, and Atlantic Station, a retail hub that has become one of the area’s premier shopping and dining destinations. Westside is growing in popularity, with an Atlanta BeltLine expansion and a residential mix of lofts and industrial spaces that are attracting young professionals looking for a truly unique intown living experience. 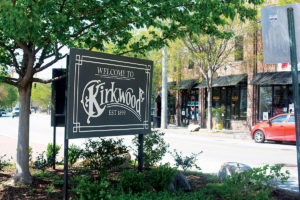 The historic Kirkwood neighborhood is nestled on the eastside of Atlanta. Once considered a quiet streetcar suburb, the neighborhood borders Lake Clare, East Lake, Edgewood and Oakhurst. With a central location only four miles from the center of the city, Kirkwood is ideal for young families and professionals looking for proximity to both Downtown Atlanta and neighboring Decatur. Historic Victorian homes, craft bungalows, newer townhouses and modern condos attract a mix of diverse residents to this “small town in the big city.” Once a relatively sleepy ITP neighborhood, Kirkwood is now a trendy spot for dining, shopping, arts, culture and more. historic-kirkwood.org 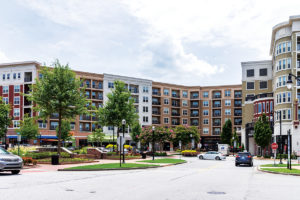 Head north of Atlanta and east of Buckhead to discover the city of Brookhaven. Tucked inside the edges of the perimeter, Brookhaven became a fully incorporated city in 2012. Brookhaven’s mix of historic homes and booming economic development, including mixed-use destinations like the popular Town Brookhaven, draws metro residents looking for a more reasonable cost of living without skimping on urban amenities. Locals love the five walkable neighborhoods that comprise Brookhaven and offer access to shopping, locally owned restaurants, excellent public schools and more. Brookhaven also features eight beautiful parks, providing residents and visitors alike with a haven from the hustle and bustle of the surrounding metro area. The city also is home to the pioneering Emory Sports Medicine Complex, which serves at the Atlanta Hawks’ training facility. brookhavenga.gov

A true international hot spot, Doraville is one of the metro Atlanta area’s most diverse cities. It is home to the Southeast’s most prominent and prosperous immigrant-owned small business community, as well as a thriving and affordable housing market. The city also has become a beacon for an array of industries, including Georgia’s booming film industry; in fact, Doraville was chosen as the location for Third Rail Studios, a state-of-the-art full-service film and production studio. Located only 10 miles northeast of Downtown Atlanta, 25 miles from Hartsfield-Jackson Atlanta International Airport, and three miles from Peachtree-DeKalb Airport, Doraville is strategically located and close to everything a resident could want, from outstanding business and recreation opportunities to top-notch schools. doravillega.us 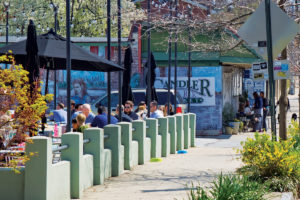 Located on the east side of Atlanta, Candler Park is recognized as one of the metro area’s first suburbs. The neighborhood was established in 1890 but truly made its mark in 1922 when Coca-Cola magnate Asa Griggs Candler donated 55 acres of land that has become the much-visited Candler Park, which features a nine-hole golf course, a swimming pool, athletic fields, tennis courts, a playground and more. A large portion of the neighborhood, the Candler Park Historic District, was listed on the National Register of Historic Places in 1983. Today, the intown neighborhood is replete with charming single-family bungalows, trendy restaurants, cool shops, excellent schools and an abundance of recreation opportunities. candlerpark.org

Outside the Perimeter (OTP) 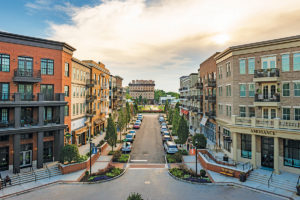 Alpharetta isn’t just a coveted OTP location, it also consistently ranks on Sperling’s Best Places to Live list. Situated 28 miles north of Atlanta in North Fulton county, Alpharetta is desirable for its excellent housing and outstanding schools. A wide array of dining, shopping and entertainment options in Alpharetta are readily available in locales like the newly revitalized downtown Alpharetta City Center and the mixed-used development of Avalon. Alpharetta is also an ideal location for entrepreneurs and business-minded individuals, having been named one of the Best Small Cities to Start a Business by Verizon in 2019. In fact, thanks to an influx of tech companies of all kinds, the city is now known as the “Technology City of the South.” It also was named one of the Best Suburbs in Georgia by Niche in 2019 and one of the Best Places to Live in Georgia by HomeSnacks in 2020. awesomealpharetta.com

Head 31 miles southwest of Atlanta to the award-winning master-planned community of Peachtree City. Just be sure to ditch the car and charge up the golf cart for a jaunt to reputable schools, shops, restaurants and entertainment venues, including the beloved Frederick Brown Jr. Amphitheater, known as “The Fred.” Although golfing is wildly popular in Peachtree City, you don’t need to play the sport to use the city’s more than 100 miles of paved, wooded golf cart paths, which have become a hallmark of this pioneering city. Peachtree City is popular with families but still retains an active senior citizen base and everyone in between. Residents enjoy a strong sense of community, as well as ample residential options and access to an ever-growing business sector that welcomes companies of all sizes from an array of industries. peachtree-city.org 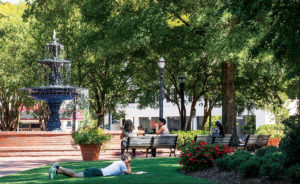 Despite its proximity just 15 miles northwest of Atlanta, Marietta holds its own as a city that offers a little bit of everything. Residents spend their weekends among six local museums, live theaters, shopping, restaurants, parks and cultural events year-round. Marietta’s heart and soul lie in its namesake square, where people meet for festivals and concerts, as well as to enjoy the beautiful gazebo, outstanding dining options and a playground train engine. In addition to its recreational and tourism offerings, Marietta is home to everything from the exceptional Cobb County and Marietta City school systems to the Marietta Square Market and the Franklin Gateway Corridor, which has seen one of the metro area’s most significant and successful economic redevelopment efforts in recent years. visitmariettaga.com 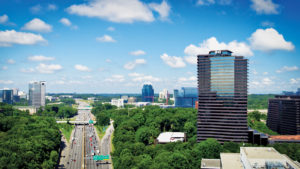 Dunwoody features the perfect blend of recreation and business, with world-class dining, the famed Spruill Center for the Arts and Spruill Gallery, the Dunwoody Nature Center, festivals, shopping and a bustling Perimeter-based business community that continues to grow exponentially. Located only 29 miles north of Atlanta, the city features a reasonable commute and convenient MARTA access. A mix of young professionals and families make their home in Dunwoody and enjoy urban amenities and quality schools. Housing is more expensive than some OTP cities but is still reasonable and offers more bang for your buck than most ITP neighborhoods. dunwoodyga.gov

Residents drive 34 miles northeast of Atlanta to call Suwanee home. Named as one of the best places to live by Money, Family Circle and Kiplinger, Suwanee boasts parks, mixed-use developments and a variety of affordable housing options. Suwanee, once known as a small agricultural town along the railroads, now blends small-town charm with modern living. Outdoor lovers feel right at home among the city’s 600 acres of parkland and trails before meeting up in the Town Center. Suwanee also boasts diversity among a mix of young professionals, families and seniors looking for upscale living. An annual Beer Fest, Suwanee Fest and Taste of BBQ are just some of Suwanee’s year-round events and activities. suwanee.com 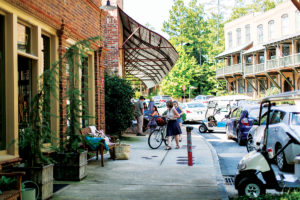 Head 36 miles south of Atlanta to Chattahoochee Hills to find this renowned wellness community created in 2004. Serenbe is a whimsical, European-style hamlet with endless green space, artsy community development and superb dining options, as well as EarthCraft-certified homes and architectural planning that focuses on providing a new and unique standard of living. The community seamlessly delivers a modern twist on the 19th-century utopia, with a focus on creating an environment that highlights the bond between humans and nature. Residents and visitors gather at the renowned Serenbe Playhouse and stay overnight at the Inn at Serenbe, as well as revel in acres of preserved forest and meadows. Serenbe is the epitome of New Urbanism just outside the perimeter of Atlanta. serenbe.com

Welcome to Alpharetta Find the perfect Alpharetta hotel. Whether you’re in town for a quick business trip or plan to explore the Alpharetta area while vacationing, Alpharetta of... read more