For the last several years, Atlanta has grown with lightning speed. Companies of all sizes have relocated to or been established in the metro area, and the population has increased with equal momentum. Local counties and cities have ramped up their economic development efforts to match the area’s impressive evolution, and the ATL has become a magnet for even more expansion. And although this successful growth can be found across the entire 20-county region, there definitely are hot spots that have emerged as coveted locales for relocators. Here, we look at four counties that are catching the eye of businesses and individuals alike and shining a light on Atlanta’s outstanding economic development achievements.

Located only 20 miles southeast of Downtown Atlanta, Henry County has become one of the metro Atlanta area’s most popular destinations for new business. Its location so close to Hartfield-Jackson Atlanta International Airport, as well as its access to both direct rail service from Norfolk Southern Railroad and the Port of Savannah, makes this county a bona fide hub for the global advanced manufacturing, transportation and distribution industries. Henry also is recognized as a premier spot for the automotive industry, as well as companies in the healthcare services, logistics and professional services arenas. 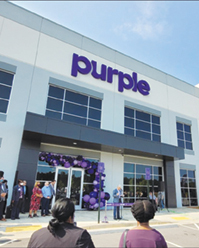 • In March 2021, Feit Electric, a leading smart home and energy-efficient lighting brand, announced that it would invest more than $25 million to open a distribution center in Henry County, which will be the company’s first distribution center on the East Coast and will create 120 jobs for the area.

• Pregis, a leading manufacturer of protective packaging for both consumer and industrial market segments, recently began to call Henry County home with the opening of a $14 million manufacturing facility in McDonough; the move to the county will create 80 jobs initially and add up to 150 more opportunities over the next several years.

• Purple Innovation, Inc., the creator of the popular Purple® Mattress, is bringing 500 jobs to Henry County with a new customer service call center located in McDonough. The center is an expansion of its current Henry County facility and will open in the spring of 2022 to handle production, fulfillment, customer care and other areas of the burgeoning business.

DeKalb County has been recognized as one the fastest-growing job markets in the State of Georgia, particularly in the healthcare, retail and food service arenas. Over the last several years, major organizations have decided to call the county home, including Amazon, Zillow, State Farm Insurance and IHG Hotels & Resorts. Those names join an impressive list that includes Emory Healthcare, Children’s Healthcare of Atlanta and the Centers for Disease Control and Prevention. In fact, more than half of Fortune 500 companies in Georgia can be found in DeKalb. What’s more, the entertainment industry has played a significant role in the county’s economic development feats. 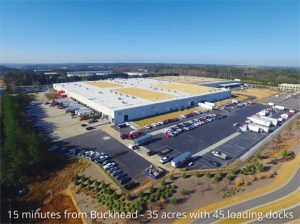 • With three major film studios located in DeKalb County—Blackhall Studios, Eagle Rock Studios and Third Rail Studios—the return of entertainment productions during the COVID pandemic was a huge boon for the metro area. In fact, the film and television industry in Georgia reported that the local film industry set a new record with $4 billion in direct spending on productions within the state during fiscal year 2021.

• Sugar Bowl Bakery, one of the country’s leading minority-owned bakeries, chose to locate its first East Coast location in DeKalb County. The recently opened 17,000-square-foot facility in Tucker ultimately will bring 400 jobs to the area, as well as an investment of $37 million over the next five years.

• Plans for a new Amazon “last-mile” distribution center are moving forward in Chamblee. In March of 2021, the City Council rezoned 24 acres of property to make way for the 103,000-square-foot facility, which will operate 24 hours a day, seven days a week and be the last stop for packages being distributed throughout metro Atlanta.

Mixed-used developments are popping up all over Gwinnett County these days, thanks in large part to the many businesses that are looking for office space in the state’s second most populous county. More than 500 internationally based businesses have planted roots in Gwinnett, which also plays host to a variety of booming industries, from information technology and health sciences to professional services and supply chain management. The county also boasts a diversity index of 80 percent and a labor force that is 1.8 million strong. And with a wide range of incentives and resources, Gwinnett continues to be a major draw for companies of all sizes.

• Intuitive, a pioneer in robotic-assisted surgery and a leader in minimally invasive care, announced that it will invest more than $500 million in its current campus in Gwinnett County—an effort that will add 1,200 jobs to Peachtree Corners. The expansion will include more than 750,000 square feet of manufacturing and engineering operations, as well as training facilities for surgeons and hospital care teams.

• A $15 million capital investment and 300 jobs will come from Epi Breads’ corporate relocation to Gwinnett County. The company, which delivers custom breads across food service and retail industries nationwide, will move its bakery and corporate offices to a 176,000-square-foot facility in unincorporated Gwinnett.

• Soliant, a provider of specialized healthcare and education staffing services to hospitals and schools across the country, announced in June that it will expand its Gwinnett County operations, adding 200 jobs for the local workforce. The company recently expanded its Peachtree Corners headquarters by 25,000 square feet, and the new jobs associated with the expansion will focus on education and healthcare recruiting.

Of course, as the home of Downtown Atlanta, Midtown Atlanta and Buckhead, Fulton County is a center of activity for the metro area’s economic development initiatives and successes. Fulton’s business climate is thriving, and it is recognized as having the third largest concentration of Fortune 500 companies in the United States. Yet, the county also boasts a robust list of small and mid-sized businesses, as well as numerous educational institutions that provide relocating companies with access to one of the country’s most well-prepared workforces.

• GCP Applied Technologies Inc., a global construction chemicals and building product company, will move its corporate headquarters from Boston to Atlanta. The relocation will bring 80 jobs to the metro area over the next two years, offering opportunities in accounting, finance, legal and information technology.

• Kainos, a global digital technology company, plans to invest $1.2 million in Fulton County when it opens a North American sales and information technology hub in Buckhead. The new facility will bring 137 jobs to the county.

• Union City is the home of PAC Worldwide’s first Georgia location. The global manufacturer of custom packaging solutions brings with it a $47 million investment in the county, as well as 400 jobs. The company decided to operate out of an existing 500,000-square-foot facility in Union City and continues to hire for positions in manufacturing, logistics and customer experience.

It’s no secret that Georgia has been recognized for its exceptional business-friendly environment. In fact, Site Selection has named it the number one state for doing business for eight consecutive years. read more

Georgia has been recognized for its exceptional business-friendly environment. Here are five of the most recent Business relocations to our fair city and its surrounding areas. read more