By The Georgia Department of Economic Development

In 2021, Georgia achieved a banner year for economic development despite a global pandemic. Georgia’s foundation of strong assets—including the state’s highly skilled and educated workforce, existing logistics infrastructure and strong partnerships with other agencies, companies and communities—continue to diversify the state’s population and economy, producing record results. Georgia now enters 2022 with the same foundation of assets and a great deal of promise for generating new jobs and investment in metro Atlanta and every corner of the state.

New economic development projects and expansions resulted in a five percent increase in job creation above previous state economic development records, while investments increased by 46 percent between July 2020 and June 2021. By the numbers, this means the Georgia Department of Economic Development (GDEcD) and local communities secured nearly $11 billion in new investments in projects that will create more than 33,400 direct jobs.

In Atlanta, a variety of factors helped the city achieve back-to-back titles as the number one tech hub. Investments in education, targeted industry growth and seamless partnerships led to this achievement from Business Facilities in 2020 and 2021. Furthermore, Georgia startups in the metro Atlanta area alone raised nearly $3 billion over the past year, according to PitchBook, the National Venture Capital Association’s Venture Monitor report, for the third quarter of calendar year 2021. Additionally, in 2020, the Partnership for Inclusive Innovation was launched as a first-of-its-kind public-private partnership to lead coordinated, statewide efforts to encourage growth, entrepreneurship and innovation across the state. These 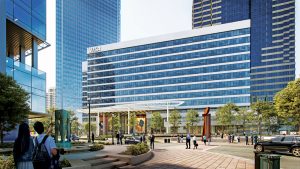 Also at Tech Square in Midtown Atlanta, more than 30 corporate innovation centers have made a home for themselves, including those for renowned names like Delta Air Lines, The Home Depot, AT&T and Honeywell. Tech Square provides access to top talent in the metro Atlanta area, including institutions like Georgia Tech, Georgia State University, Emory University and the Historically Black Colleges and Universities (HBCUs) found within Atlanta’s University Center. In fact, home to two of the nation’s top public universities—Georgia Tech and the University of Georgia—and to two of the nation’s top five HBCUs – Spelman College and Morehouse College, located in the heart of Atlanta—the state is renowned for the strong and diverse talent produced here. Georgia State University, also located in Atlanta, ranks in the top 10 U.S. colleges and universities for both racial diversity and for advancing social mobility.

Atlanta’s “hotbed of talent from traditionally underrepresented communities,” as described by Harvard Business Review, has made Georgia a target state for tech companies looking to further advance their diversity, equity and inclusion goals. In fact, CBRE recently reported that Atlanta has the most diversity of the top 10 tech markets, with the highest growth rate of the top 50 tech hubs between 2015 and 2019.

In addition to the educational opportunities available in Atlanta and across the state, ChooseATL, an initiative of the Metro Atlanta Chamber, was developed specifically to attract and retain next-gen talent to metro Atlanta. Built from a local grassroots movement, ChooseATL has reached millions of young professionals and has left them inspired by Atlanta’s unique mix of careers, community and culture.

At GDEcD, the Center of Innovation team continues to provide tailored services and industry expertise to companies large and small in some of the state’s leading industries, including manufacturing, logistics, IT, aerospace, energy, and agricultural technology (AgTech). A concierge service provided by the state, the Georgia Center of Innovation’s staff partners closely with businesses as part of the state’s approach to economic development. And the efforts can be found across the entire spectrum of vital industries.

As cybersecurity becomes a greater focus globally, Georgia’s specialized education programs like the Georgia FinTech Academy continue to attract both companies and talent within industry. The Georgia FinTech Academy is a collaboration between Georgia’s FinTech industry and the 26 public institutions of the University System of Georgia. The state Board of Education also recently approved cloud computing as part of the Georgia Career Pathways program in public high schools. These courses were developed with several tech companies with a presence in Georgia including AWS, Google Cloud, NCR, Accenture and Microsoft.

Also in the FinTech space, Georgia’s reputation as “Transaction Alley” also only continues to grow. Home to major payment processing companies like InComm, NCR and Global Payments, 70 percent of global transactions are handled by payment processing firms located in the state. This year, Georgia-based Global Payments moved onto the Fortune 500 list for the first time. Additionally, Georgia-based Greenlight, an all-in-one money management platform designed for families, was named one of Forbes’ Top 2021 FinTech Firms. In September 2021, Visa, a world leader in digital payments, committed to opening a brand new office hub in Midtown.

Another key sector, life sciences has experienced growth at a pace of more than twice the national average for the last five years in a row. The newly formed Global Health Crisis Coordination Center (GHC3) became the latest addition to the impressive roster of global health organizations headquartered in Georgia, joining the Centers for Disease Control and Prevention, American Cancer Society and other major healthcare and research centers. And as the pandemic turned the world’s attention to healthcare and life sciences research and innovation, Georgia’s life sciences community took a leadership role in confronting COVID-19 head on, employing its symbiotic ecosystem to develop plasma therapies and to support vaccine development.

Georgia’s long-term leadership in agribusiness, its world-class ports system and its geographic location—within a two-hour flight or two-day truck drive from 80 percent of the U.S. market—has also attracted investment from both domestic and international food and beverage companies. In total, international partnerships accounted for the creation of nearly $2 billion in foreign direct investment in the state. What’s more, job creation from economic development projects in the state’s food processing industry increased by 232 percent, and the metro Atlanta area became home to two Freshly, Inc. locations, with one in Cobb County’s Austell and the other located in Clayton County. America’s leading meal kit company HelloFresh also established a distribution center in Newnan. Northeast of Atlanta, King’s Hawaiian has continued to invest in expanding its operations in Oakwood over the past decade. Further, Coffee Café Bakery, a Dunkin’ supplier, announced a state-of-the-art production facility in Fulton County that will supply goods to Dunkin’ restaurants across the metro Atlanta area, while Sugar Bowl Bakery, one of the leading minority-owned bakeries in the U.S., will locate its first East Coast location in DeKalb County.

Numerous automotive, advanced manufacturing, software and technology and logistics and distribution companies also made significant investments in the state. Almost every one of these companies, including Microsoft, Heliox, Danimer Scientific and Amazon, cited the state’s diverse and highly educated workforce. This past year, Georgia’s University System set a new record for degrees awarded. In fact, Georgia’s 85 accredited public and private universities award more than 132,000 degrees and certificates to its graduates annually.

All of this economic development is a testament to Georgia’s strong economic recovery and to the array of resources Atlanta offers to entrepreneurs. Georgia’s diversity, strong relationships and innovative solutions continue to produce positive results and new opportunities for Georgians and communities statewide.

For more information, visit The Georgia Department of Economic Development at georgia.org.

The Georgia Department of Economic Development is proud to be the lead agency for attracting new business to the Atlanta regional area. read more