When the Atlanta BeltLine is complete, which is projected to be at the end of 2030, it will connect 45 intown neighborhoods around the city with a 22-mile loop of multi-purpose trail featuring pedestrian-friendly transit, public parks and more. Additionally, 11 miles of paved urban connector trails will have been built, 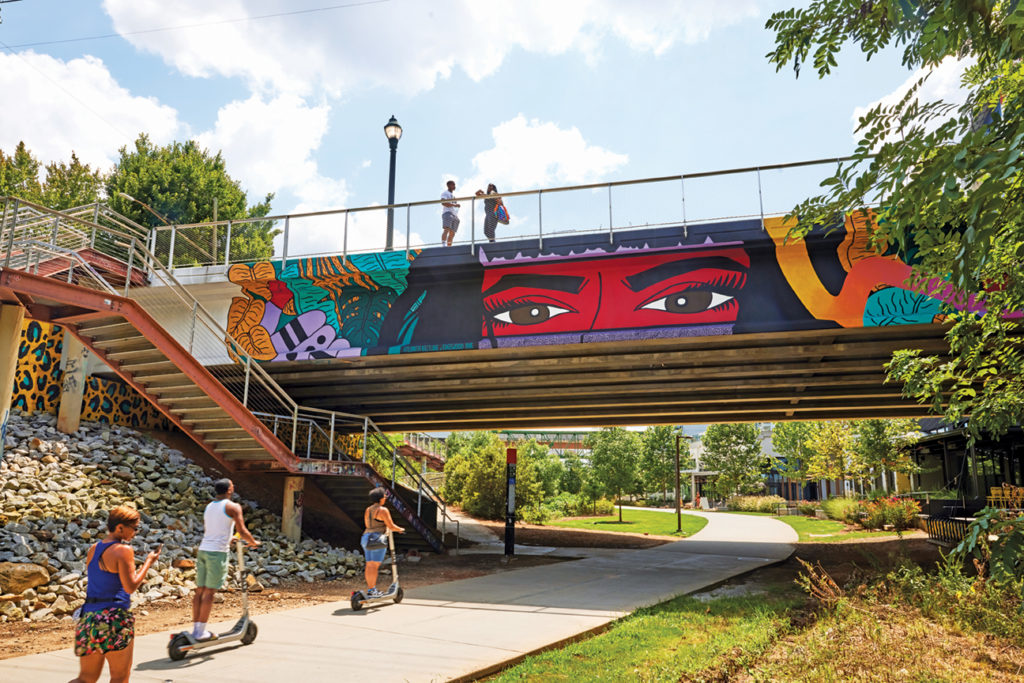 bringing people to the main trail, which also will boast 46 miles of improved streetscapes along the way. Yet, the ambitious redevelopment project, which was proposed by Georgia Tech student Ryan Gravel in 1999 as a way to reimagine Atlanta’s railroad corridor and create “equitable, inclusive and sustainable city life,” is more than just a public infrastructure initiative. In fact, it has become one of Atlanta’s largest and most prolific economic development engines.

“The City of Atlanta is growing by leaps and bounds, and the BeltLine, from an economic perspective, is designed to be a catalyst for activities that will attract private sector players as well as additional public sector investment,” explains Kelvin Collins, vice president of economic development for Atlanta BeltLine, Inc. (ABI), the organization charged with planning, developing and executing the BeltLine project. “When someone thinks of the BeltLine, we want them to not just think of a public amenity, but also think of it like an economic transformation project that is going to impact lives and generations to come.”

Upon its completion, the Atlanta BeltLine is slated to have generated more than $10 billion in economic development for the city and created 50,000 permanent full-time jobs. Many strides have been made to advance towards these impressive goals since the project’s official launch in 2005. And the BeltLine has become a bona fide beacon of positive economic news and opportunity as the metro area has emerged from the pandemic, with an array of funding and grants being awarded to the project recently and construction poised to increase exponentially over the coming months. “There’s no other project like the BeltLine,” Collins observes. “That’s why we have to seize the moment.”

Get Down to Business

The Atlanta BeltLine is comprised of eight major trails covering the entire 22-mile loop, from the Northside to the Southside and the Eastside to the Westside. Each of the trails is under development and boasts some level of completion, and the buzz of activity has encouraged businesses of all sizes to consider what it would mean to be located somewhere along the bustling corridor. Those companies are doing more than thinking—they’re acting. In fact, there currently are more than 3,000 business licenses located within a half-mile of the Atlanta BeltLine. Companies of different sizes are flocking to the area for varying and very specific reasons, and ABI, in collaboration with the Atlanta BeltLine Partnership (ABP), the nonprofit organization that works to raise philanthropic  funds and awareness for the project, is excited to help all businesses along the BeltLine succeed.

For years, major national companies have made their way to Atlanta, with many corporations relocating their headquarters, distribution centers and additional operations to take advantage of the city’s—and the State of Georgia’s—exceptional business-friendly environment. The BeltLine has become an integral part of that opportunity, and a host of top national brands have started finding their way to locations along the project corridor. Some are moving to Atlanta from other states, while many companies are relocating within the city itself. 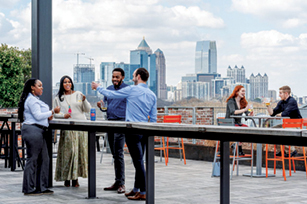 For instance, digital marketing company Mailchimp recently announced that it will move its headquarters from Ponce City Market to a new $1 billion mixed-used development from New City Properties in the Old Fourth Ward, which is located along the Eastside Trail. Consulting giant McKinsey & Co. also chose to leave its longtime downtown location to move to the BeltLine’s Eastside Trail, which has become a significant magnet for business activity with $3.7 billion in private redevelopment in recent years. The Atlanta Business Chronicle also relocated from Buckhead to the Old Fourth Ward, taking up residence in the redeveloped Southern Dairies office complex. According to Collins, this activity has prompted a variety of large companies from Corporate America, including Microsoft and Nike, to make major moves toward the BeltLine as well.

“If it’s happening in Atlanta, it’s happening on the BeltLine,” Collins explains. “This is creating a new pattern of development in which national brand companies are coming to Atlanta because of the connectivity and the talent. And those large companies are finding ways to leverage the idea of being on the BeltLine as a recruiting and retention tool for that talent.”

He continues, “The world of work has changed. If you’re going to bring people back into the office, you have to give them an amazing amenity that allows them to step out onto the trail and take a walk during lunch or ride a bike to get to and from work without having to get in a car. The BeltLine provides that for top talent. All of this is part of the integration that the BeltLine offers, attracting top-name companies not only to the BeltLine, but also to the city and the region as a whole.”

For small independent businesses, the BeltLine is just as appealing. As Collins notes, retail shops, restaurants and a host of other businesses recognize the incredible amount of foot traffic experienced by the corridor, which sees nearly two million visitors each year. “Small businesses want to get in on the action. They want to get some of the economic benefit, the revenue potential and the consumers,” he states. “While large companies see the BeltLine as an amenity for their employees, those mom-and-pop shops are the ones that generate local jobs and are also going to make the BeltLine special.” 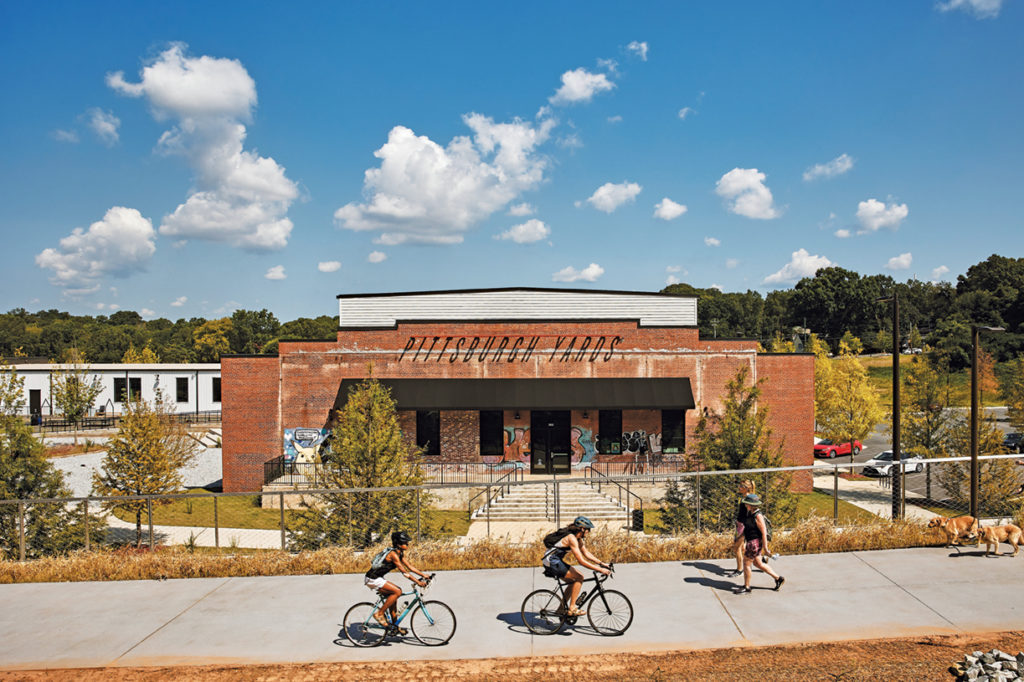 Today, the BeltLine corridor is home to small businesses covering a range of industries, from restaurant and hospitality to fitness, healthcare, art and design and more. And as more stores and restaurants have started opening along the trails that comprise the project, ABI and APB understand that market forces will change the availability and affordability of commercial space. These organizations have devised an array of programming designed to help small businesses access the resources they need to operate in the area. For example, ABI, in a joint venture with The Village Market, recently introduced the BeltLine MarketPlace, a pilot program that offers affordable commercial space for up to six local Black-owned businesses. The business incubator project will transform architectural and artistic shipping containers into storefronts that face the Westside and Eastside Trails.

“We want to help these business owners incubate their ideas and support them to help them get to a point where they can move into brick and mortar locations along the BeltLine,” Collins notes. “We are being very intentional and thoughtful. We welcome large businesses, but we also recognize that small businesses need to be in on the action, and we cannot leave that up to market conditions.”

Currently, an independent committee is reviewing applications for the BeltLine MarketPlace, which will involve much more than the storefront opportunity. Those selected also will receive technical assistance, business coaching, marketing support and access to additional resources to ensure that the businesses grow and can transition into larger, more permanent spaces in the near future. And the goal is to scale the project all along the BeltLine to allow many other small business owners to enjoy the same benefits.

Collins says, “We love the big business in the area, but we also want to spend time with the local independent businesses. We want to leverage the project in order to have successful entrepreneurship around the BeltLine. To me, that is the legacy.”

Since the beginning of the project, the BeltLine has had a goal of establishing 50,000 permanent jobs, as well as 48,000 construction jobs to bring the trails, parks and transit resources to fruition. To date, ABI and APB are well on their way to making this a reality, with nearly half of those 50,000 private sector jobs 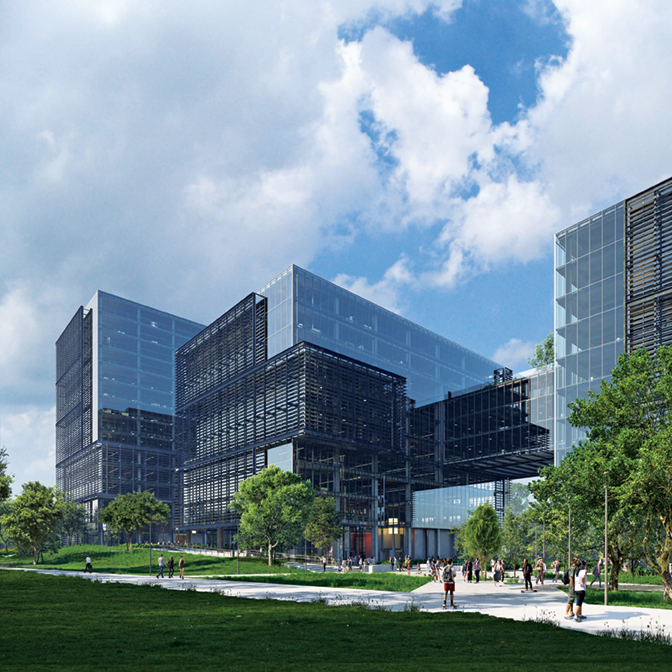 already in play. And with construction along the BeltLine really ramping up in the coming months and years, those construction jobs are going to provide a real boost to the local job market in the region.

Of course, ABI is not simply creating an environment that allows jobs to be available and hoping that people will find their way to them. That’s why ABI and APB, along with a number of community partners, have set their sights on an array of workforce development efforts. “We want to be able to bridge the gap,” Collins says. “What we want to be able to do now is to make sure that the residents who are around the BeltLine can participate in those job opportunities. We want to look at what skills are needed to match the job opportunities and help train the local talent so they can participate.”

To that end, in 2020, ABI and ABP joined forces with STRIVE Atlanta to offer its program, which encompasses a five-pillar model addressing job readiness training, occupational skills training, career coaching, job placement and lifetime support. “We want to make sure that residents get access to the jobs that are coming, whether they’re in construction technology, logistics or hospitality,” Collins says. “We want to help businesses access the local talent and make sure that the local talent feels that they can easily access those jobs. We want to bring everyone together.”

Late last year, ABI, ABP and the project’s partners achieved a funding milestone that will provide more than $300 million to keep the BeltLine development moving through 2030. The funding push was in part a result of the passage of the BeltLine Special Service District in March of 2021, which will bring together 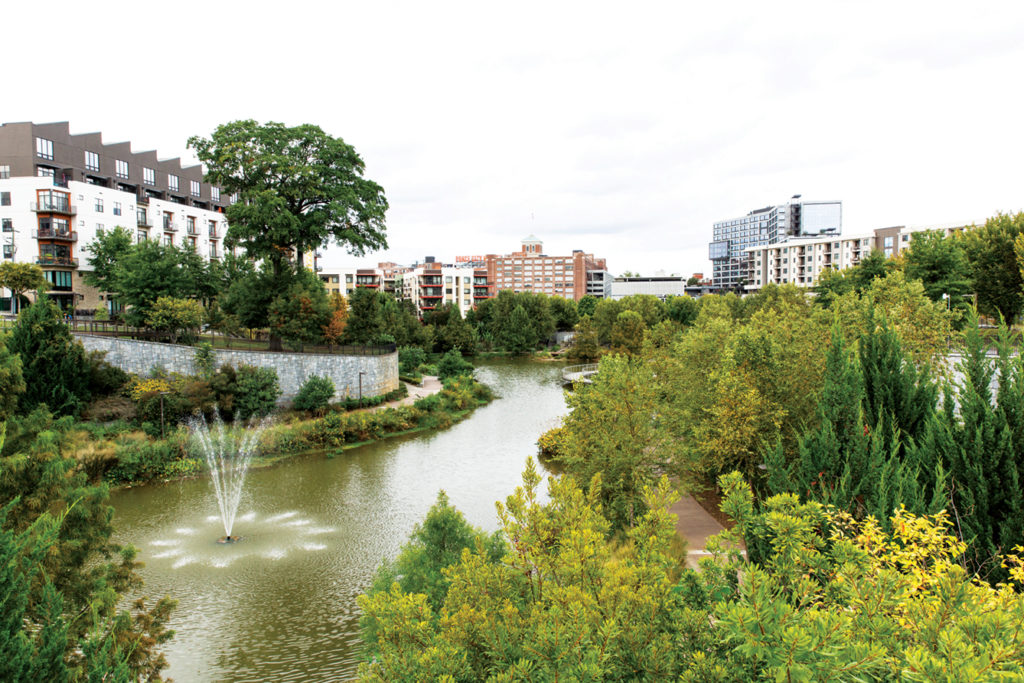 an array of community resources to help complete the 22-mile corridor. Additionally, the project received $80 million from the Robert W. Woodruff Foundation and $30 million from the James M. Cox Foundation to further fund the completion of the project. And companies large and small continue to support the BeltLine, participating in sponsorships and fundraising efforts that will help benefit the project itself and the community-at-large.

“The funding of resources is there, and we have a line of sight to complete the trail,” Collins says. “Our CEO, Clyde Higgins, has positioned us well to execute this last eight years of the project. Our team is highly motivated and ready to go.”

The forward motion of the BeltLine continues to draw national attention, as there is no other redevelopment project like it in the country. The level of investment made to take  a railroad corridor that once separated neighborhoods and transform it to connect those locales is unprecedented, as is the economic development associated with that effort. “This is a once-in-a-lifetime and a once-in-a-generation opportunity to bring economic benefit by leveraging public infrastructure,” Collins concludes, “The BeltLine is where Atlanta comes together. And now, it has come to life.”

The Atlanta BeltLine by the Numbers

The Atlanta BeltLine project is at once impressive and formidable. Just look at what will be accomplished when the project is completed. The numbers speak for themselves.

For Atlanta BeltLine, Inc., housing is a key factor in the economic development associated with the BeltLine project. As Kelvin Collins says, “We want to create new housing opportunities around the BeltLine because we want the BeltLine to be a great place to live, work and play.”

By the end of 2030, the goal is to have 5,600 units of affordable and equitable workforce housing available for the public. Yet, the homes will not be affordable simply because of how and where they are built. By creating the overall environment for new jobs, the BeltLine will help local employees have the income to access those quality, well-appointed homes. It’s a vision that has come quite far in recent years, with more than 3,100 affordable homes already completed.

“We are marching towards that 5,600 homes,” Collins says. “It’s all part of the economic development umbrella.”